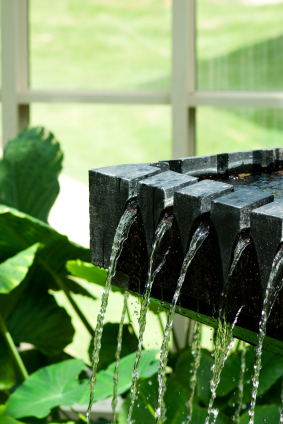 Despite the pleasing aesthetic, open, indoor water features may be banned in new hospital construction if a proposed change in the upcoming Facility Guidelines Institute’s (FGI) Guidelines for Design and Construction of Hospitals and Outpatient Facilities is approved for the 2014 edition.

Current FGI guidelines, approved in 2010, require open water features to manage the safety of water quality to shield patients, workers and visitors from irritating aerosols or those that have been tainted. Under newer and tougher regulations, indoor water features that are unsealed will not be allowed.

The issue of open indoor water features is a controversial one. On one side, hospital donors and patients support the continued use of indoor water features, citing such wide-ranging factors as the positive impact it can have on visitors and staff by creating a calming affect, reduce stress levels and potentially increase satisfaction among patients.

Conversely, professionals who encourage a ban on open, indoor water features argue that documented occurrences of disease and death blamed on waterborne pathogens supersede the lack of substantive data connected with alleged benefits.

Although these outbreaks are rare, when they do occur it can result in serious consequences. Medical experts say unexpected patient illnesses and deaths in a local hospital can lead to community distrust, costly lawsuits and lost business.

After time, all eight patients that were harmed by the outbreak at the southeastern Wisconsin hospital eventually recovered from the disease. Furthermore, no additional outbreaks occurred after the fountain, according to the study.

According to the study’s lead author, “The guidelines stress that until additional data is available that demonstrates effective maintenance procedures for eliminating the risk of Legionella transmission from indoor decorative water fountains in healthcare settings, water fountains of any type should be considered at risk of becoming infected with Legionella bacteria.”

It is likely that studies similar to this situation convinced the American Society for Healthcare Engineering (ASHE) of the American Hospital Association that the health issues open water features can create aren’t worth the risk. As a result, they have supported the FGI change, affecting new hospital construction.