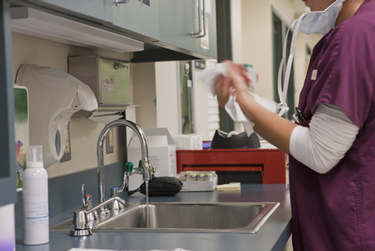 Preventing healthcare-associated infections (HAIs) at hospitals and clinics has become very important in the facility management world, particularly over the past two years.

This increased recognition of the spread of infectious diseases has come at the right time as healthcare facilities look to avoid penalties from the Centers for Medicare & Medicaid Services for failing to curb the rise of HAIs and subsequent admissions.

Studies have signaled warnings, best practices have been developed and free tools have been created to build awareness.

The most encouraging signs that real improvements are moving along smoothly can be found in The National and State Healthcare-Associated Infections Progress Report released in January by the CDC.

Based on data provided by more than 14,500 healthcare facilities to the CDC’s National Healthcare Safety Network (NHSN) up to 2013, the latest progress report features decreases in many categories.

At the state level, 26 states improved in at least two categories based on the national standardized infection ratio (SIR), a summary statistic used to track the progress of HAI prevention over time, and six performed better in four categories. Unfortunately, 27 states reported rising numbers at least two infection categories.

At the nationwide level, central-line associated bloodstream infections (CLABSIs) and surgical site infections (SSIs) dropped the most, by 46 and 19 percent, respectively.

And, the only nationwide increase among major HAIs — catheter-associated urinary tract infections (CAUTIs) by 6 percent — has shown signs of falling based on early reports from 2014, according to the CDC.

Despite the encouraging numbers, the number of states still performing worse that the rest of the nation in curbing Clostridium difficile infections, CAUTIs, CLABSIs, some SSIs and MRSA bacteremia remains too high.

Simply put, one out of every 25 patients receiving care in a healthcare facility on a single day will contract at least one infection during their stay.

Still, the CDC is quick to point out that, when facilities managers work with healthcare staffs to build awareness of problems with infections and help them to take specific preventative measures, rates of specific HAIs can fall by more than 70 percent.

The tide is slowly beginning to turn, but much work remains to be done to corral HAIs. A great place to start at your facility: Work on improving hand-washing hygiene, with assistance from the Hand Hygiene Targeted Solutions Tool (free to members of Joint Commission International).

Look for more suggestions to limit the spread of infections at your healthcare facility by subscribing to our Facebook and Twitter feeds that are frequently updated each week.

For guidance on reducing the spread of HAIs at your healthcare facility, contact Vanguard Resources.