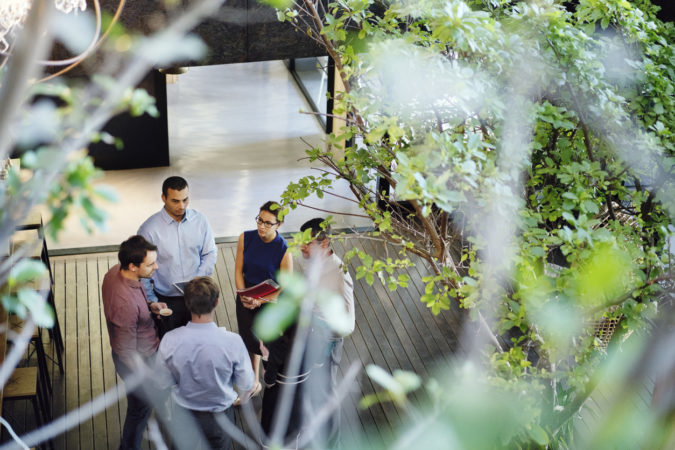 This is part six in our ongoing series on increasing employee productivity.

According to a study published in the Journal of Experimental Psychology, plants made a difference thanks to an increase—or a perception of an increase—in air quality.

Simply enriching a previously spartan space with plants served to increase productivity by 15% as a green office leads to more work engagement among employees. The results indicated that participants who worked in green office space were more productive than their counterparts who worked in a lean office space. Tasks were completed faster and—importantly—without any accompanying rise in errors.

Another study found an increase not just in productivity, but also in creativity. It’s even been shown that workers in facilities with plants need 15% fewer sick hours.

So how many plants are we talking about? They’ve done studies on this too. Apparently workers do their best work when about 7% of surfaces, like shelving and filing cabinets, are filled with plants.

What employees want, even if they don’t know the name for it, is biophilic design. Biophilia has been around since the mid ’60s. A landmark study by Roger Ulrich discovered that patients recover faster in room with views of nature, which helped transform healthcare facility design. This trend has since spread throughout the business world.

Adding real plants will help increase indoor air quality (IAQ), which has known productivity-boosting properties. Workers even respond well to fake plants, views of nature through windows, or even pictures of nature. According to a paper published in Environment and Behavior, “Even a peripheral view of plants from a work space increases productivity of knowledge workers while reducing their stress levels.” It’s the sense that workers are in contact with nature that helps boost morale and leads to higher productivity. Adding a nice mixture of smaller real plants—to improve actual IAQ—and larger fake plants—to boost visibility and the perception of nature—can be enough to do the trick.

So if you’re looking to boost productivity and creativity, as well as reduce stress and absenteeism, go green.

For more info on boosting worker productivity in your facility, contact Vanguard Resources.